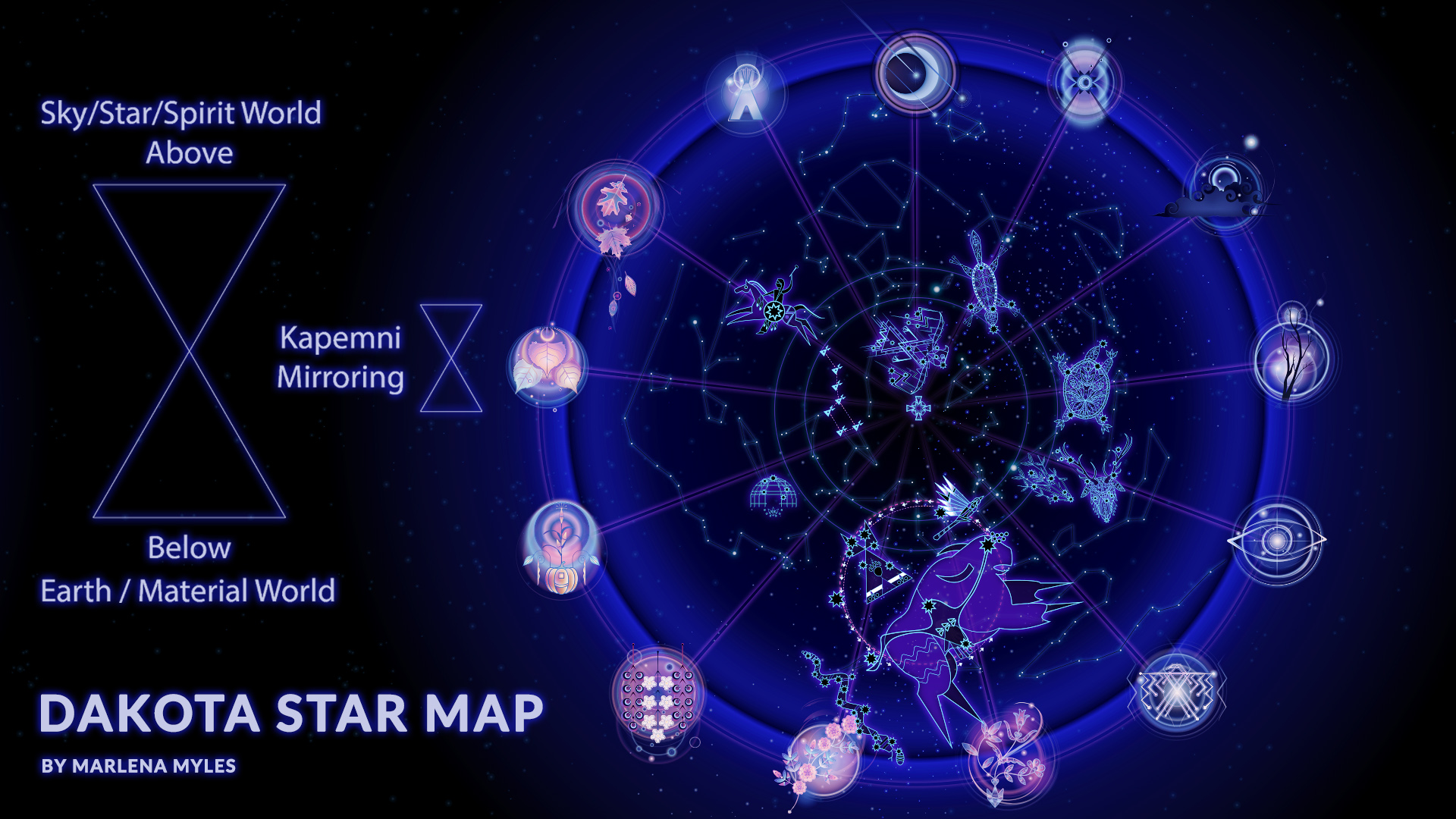 These were created by Spirit Lake Dakota artist Marlena Myles to our connection to the stars and moon above. You are free to download for personal/classroom use only. 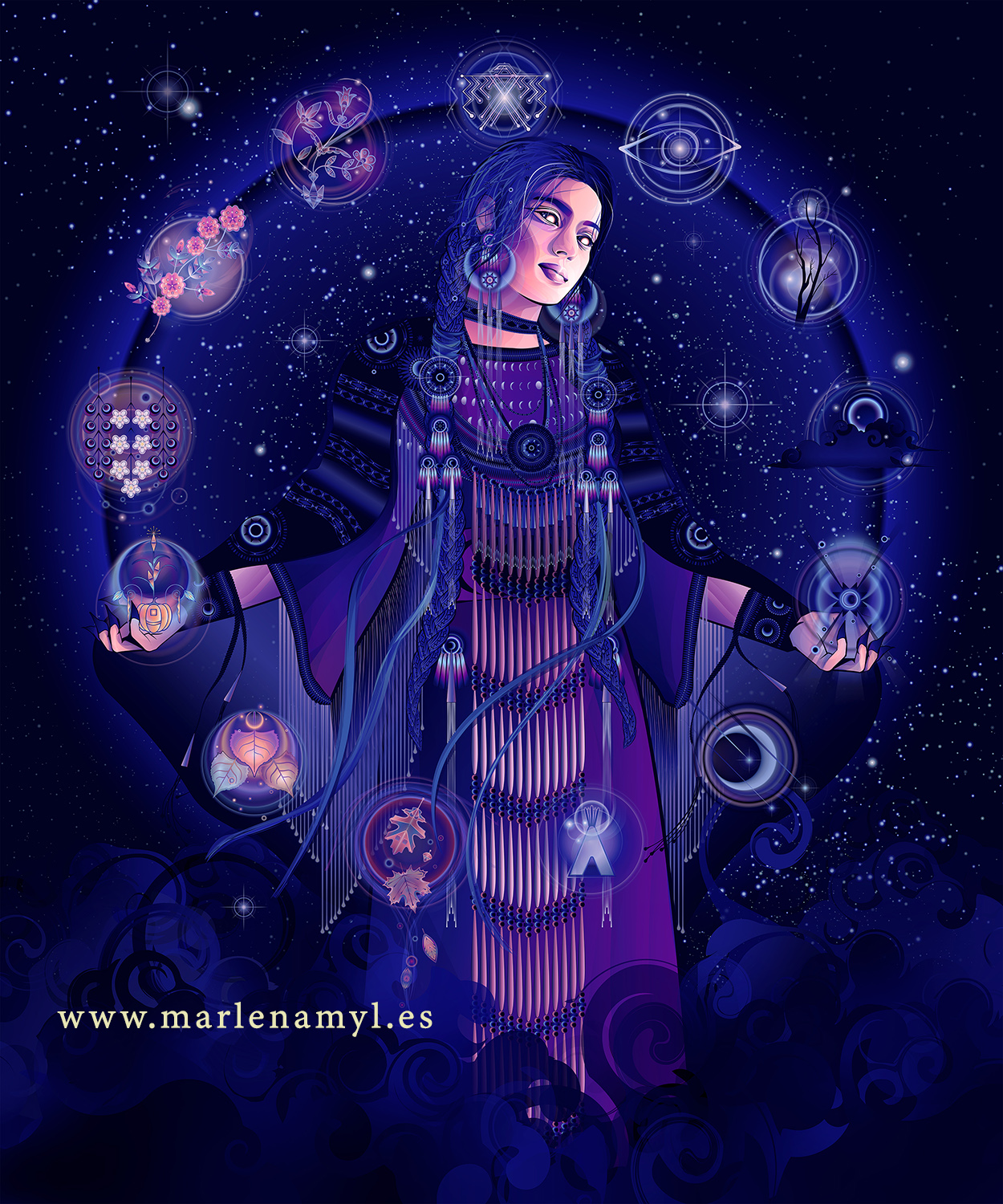 Guided by the Moon

Under the Guidance of Haŋwí
Vector illustration, 30”x24” metal print, 2020

This piece was created in Adobe Illustrator and printed on metal. It features Haŋwí, the spirit of the moon, surrounded by symbols representing the 13 lunar months.

The use of a circle as the foundation of the piece is initial as it represents Čháŋhdéška Wakháŋ (the sacred hoop), the cycles of nature and our roles as the human beings within it. Kapémni (mirroring, twirling) is a philosophical concept that what happens above in the star world is reflected on our world: besides reflecting the time of the year, mirroring also includes sacred places corresponding with the constellations above. Traditional life revolved around star knowledge, which taught us when to harvest, when to plant, when to hunt, when to have certain ceremonies. Thus, the months are lunar based and given titles to reflect traditional society reflecting the star world above.

The figure of Haŋwí is one that is standing above us, someone we can look up to in times of needing guidance; her eyes are the brightest features of the piece as representation of being a guiding light in the darkness. Behind Haŋwí is the Wanági Thačháŋku, the spirit road, also known as the Milky Way, that we travel along when leaving this bodily existence.  Beneath Haŋwí is a sea of clouds; appearing as both clouds and as waves, this form represents her power to influence the oceans, the seas, as well as the influence over people (i.e. lunatics) and over women’s menstrual cycles.

The traditional calendar of Dakota people was a 13-month lunar calendar. Each cycle of the moon guided the people’s life cycles and societal movements, including harvest, ceremonies and more. Historians have noted that there are dozens of alternative names for each month — some of the differences were based on the different locations of the villages to individual expressions.

These are the 13 lunar months I represented in this piece, the order starting from the top (which represents the return of Spring, the new year for Dakota people): 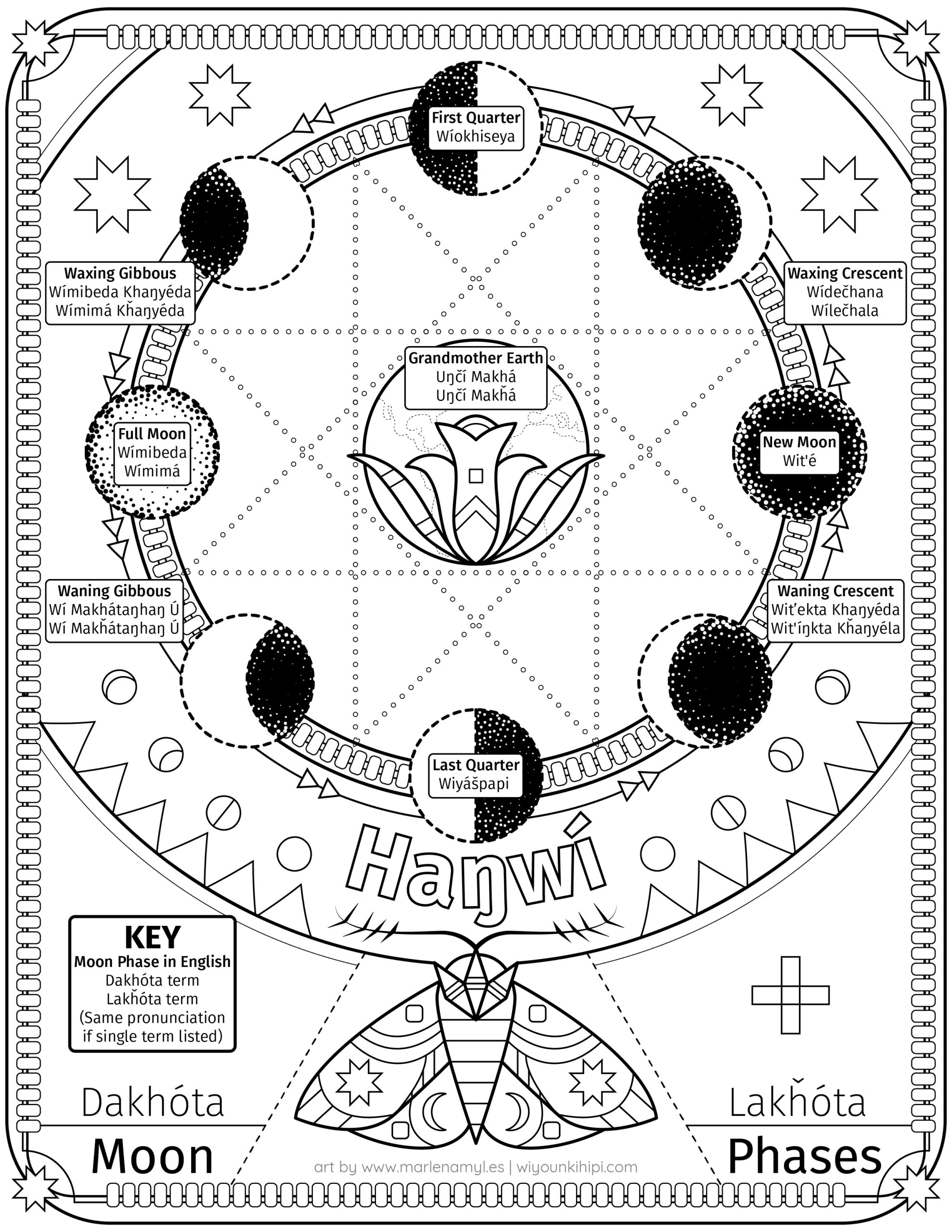 Here are the Dakota and Lakota names for the moon phases as well as a coloring page that illustrates them.

An animation I created for We Are Water MN. It is narrated by Jim Rock, UMD Alworth Planetarium Program Director and Dakota Astronomer as he shares his traditional knowledge of the connections with sky and earth. He also speaks of the burial mounds and sacred Wakan Tipi cave in Saint Paul, Minnesota, which speak to our celestial origins. 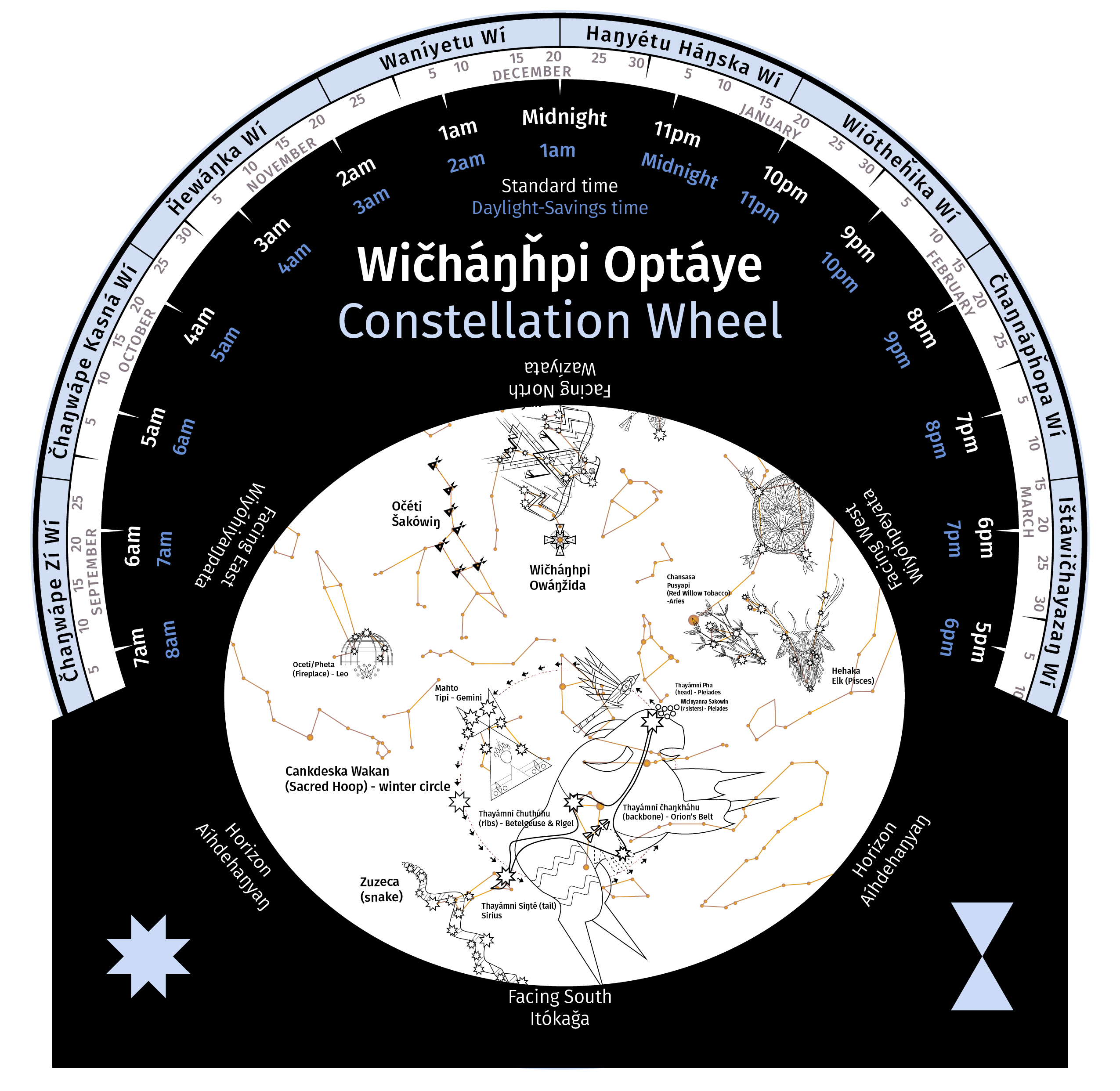 Have you ever wanted to look into the night sky and learn the name of the Dakota constellation above you? Well, this Star Chart known as a Planishere will do just that. You will need to print out both the wheel and sleeve. And then follow these directions on how to quickly assemble and use your chart! 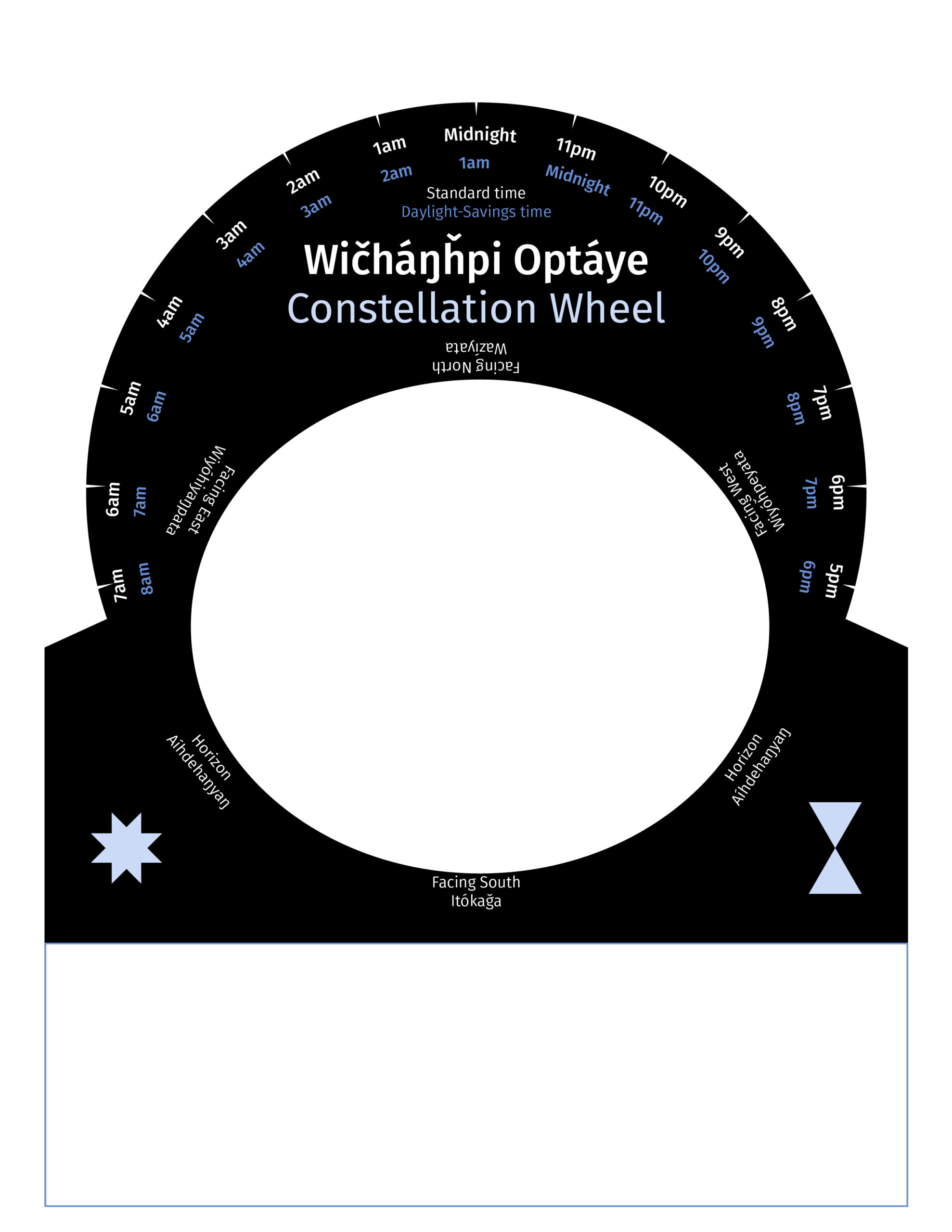 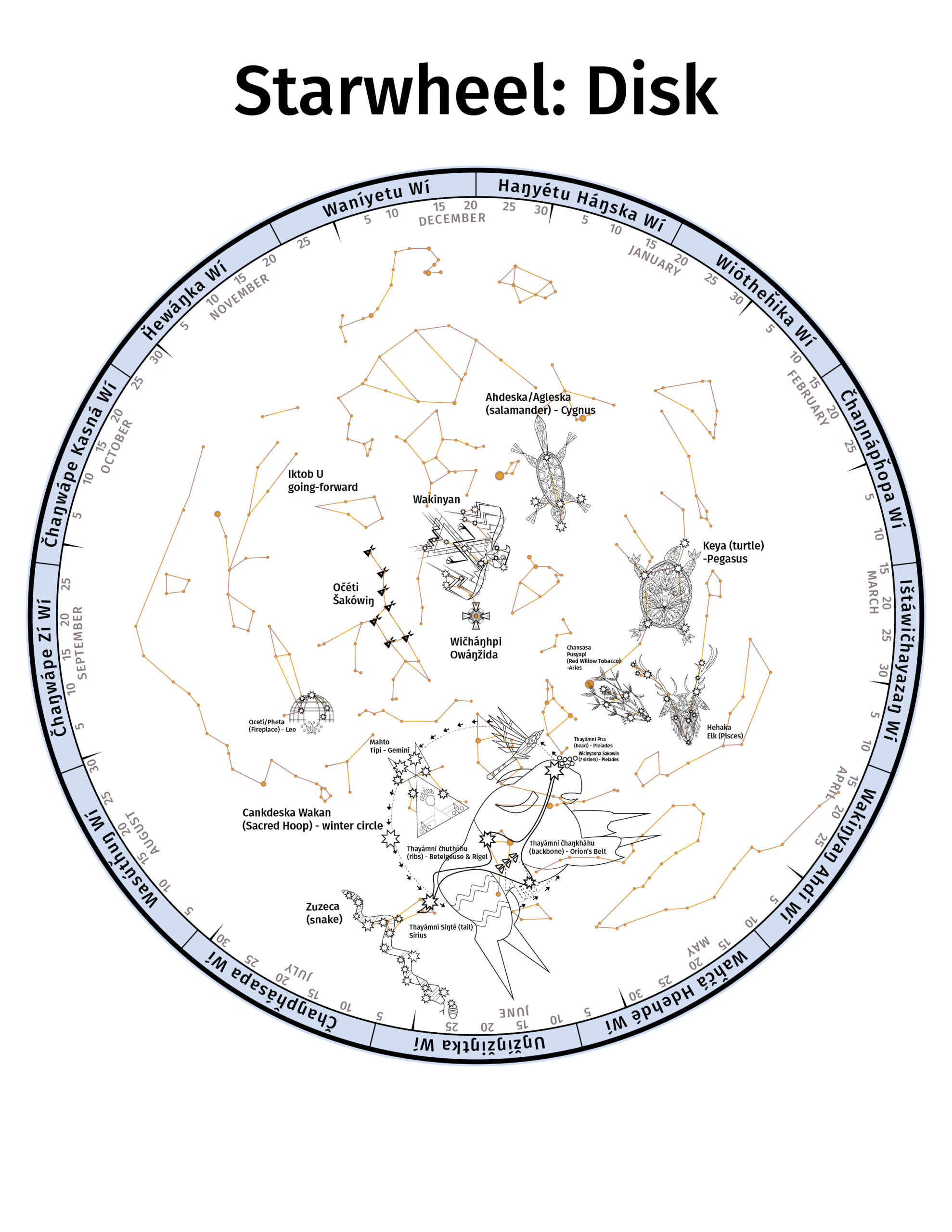 With the free AERO app by Adobe, you can experience the Dakota constellations through augmented reality on your phone and tablet.  Click this Adobe link or scan the QR code to activate it on your device (it’ll automatically direct you to the correct app)! Compatible with: 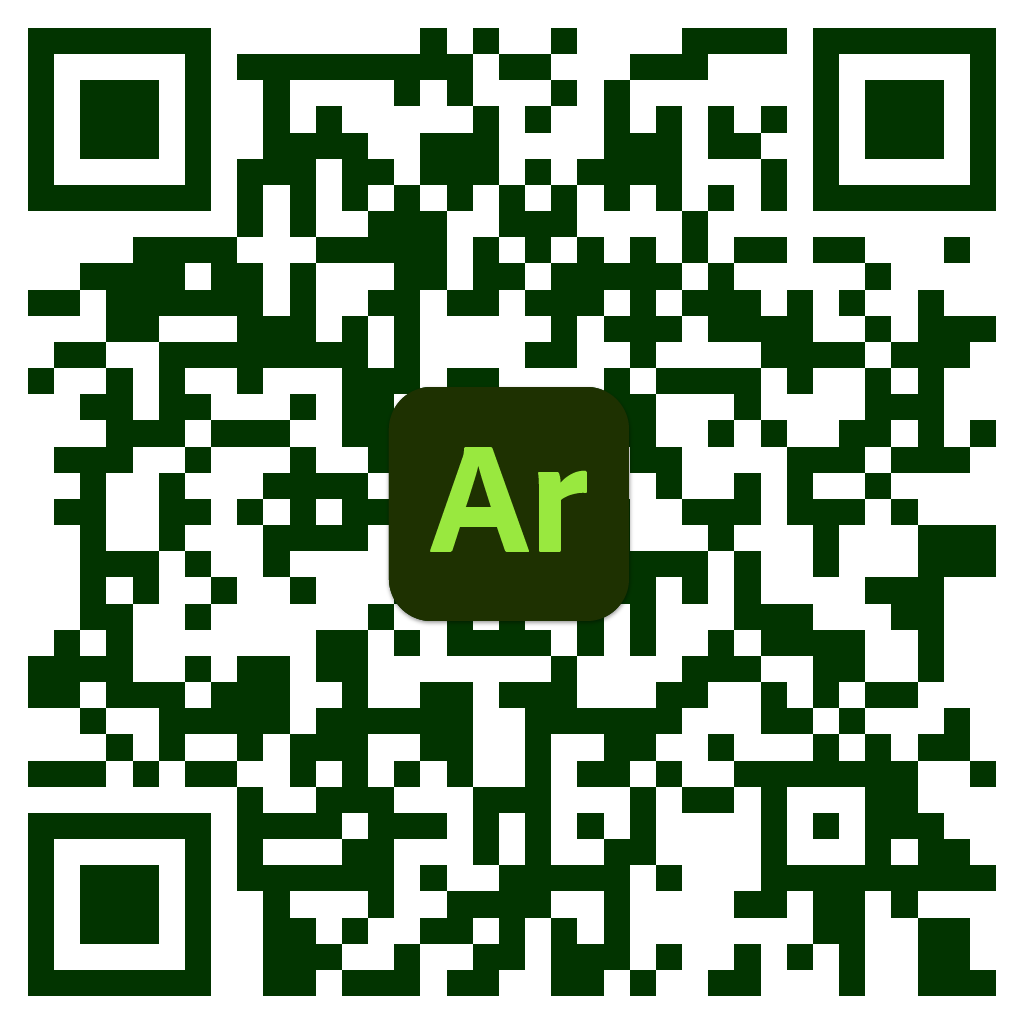